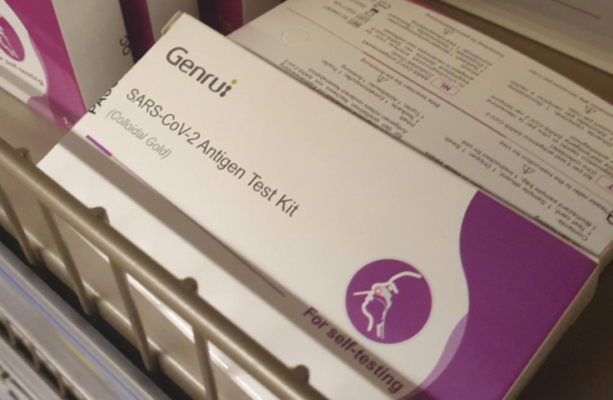 The Health Products Regulatory Authority (HPRA) and a drug company that performs antigen testing must investigate a number of complaints about apparent false positives.

The HPRA has received a number of complaints about the Genrui SARS-CoV-2 Rapid Antigen test, which is sold in a number of Irish stores and pharmacies, returning false positives.

A spokesperson said the HPRA “is following up with the test manufacturer to investigate the matter and will also liaise with other relevant European authorities in relation to this matter.”

Genrui also confirmed The newspaper that he will investigate the false positive reports. “We will conduct further internal investigations to understand the relevant facts,” said a spokesperson for the company.

The company will continue to work “with local agents and partners in Ireland and other countries to actively investigate batches of related products reported by users and to maintain active communication with those users who submit inquiries to properly manage the issues. related issues, ”they added.

I have received hundreds of messages through my Insta about Genrui antigen testing.

When the PCr was available, there seemed to have been a lot of false positives with these kits.

This could have major implications for people who currently do not have a PCr available.

Did you have any issues with them? pic.twitter.com/hmMgGz8hFp

Messages warning about the accuracy of the tests have been circulated widely on social media in recent days – many people say they tested positive on a Genrui antigen test, but then received a negative PCR test result. (which is more precise).

The Genrui brand antigen test is sold in several stores in Ireland including Lidl, Dunnes Stores, Supervalu, Centra and others. A number of pharmacies have already chosen to stop stocking them, medical sources said.

Similar problems have been reported in other countries. Authorities in Hamburg, Germany issued a warning about Genrui testing in December – saying if a faint line appears to detect the presence of Covid-19, the person should do a second antigen test from a different brand.

Genrui’s tests are CE marked, which means they have been approved for use in the EU. The company is based in China but sells products in more than 120 countries around the world.

The spokesperson for the company said that they “deeply understand that product quality is crucial in combating this pandemic, therefore, we will continue to pay attention to market feedback on the products.”

“People who have tested positive following the use of a rapid antigen test should follow the public health advice in effect on the HSE website and seek advice from their doctor if necessary,” they said. added.

Given the recent update on HSE’s testing advice amid difficulties in booking PCR tests, the issue could have serious implications in Ireland.

Below current HSE guidelines, people aged four to 39 with symptoms of Covid-19, as well as close contacts of confirmed cases, should use antigen testing rather than booking a PCR test given the huge demand currently faced by the PCR test system.

People with symptoms should self-isolate. If a person gets three negative antigen test results over a three-day period, they should continue to self-isolate until they have no symptoms for 48 hours.

The HSE declined to comment on the matter, saying The newspaper this is a problem for the HPRA.

Needlessly isolated from her children

Jenny MacMahon, who lives in Dublin, received a false positive from a Genrui antigen test on New Years Eve. She had no symptoms other than a sore throat, but assumed the antigen test was correct.

A PCR test later showed that she did not have Covid-19 but, until she got this confirmation, Jenny had to isolate herself from her husband and two of her young children.

Jenny said she and her family have used antigen tests regularly in recent months as a precaution. In the past, they used a different brand and never got a positive result.

On December 31, they used Genrui antigen testing. The rest of the family tested negative, but Jenny’s test came back positive. She and her husband, both in their 30s, had received their Covid-19 booster shots at this point.

Talk to The newspaper today Jenny explained that she has to stay with her baby girl while she breastfeeds her, but that she wears a face mask around her just in case. She and the baby isolated away from her husband and their two other children, aged five and three.

“All the tests came back negative except mine, there was a faint but very visible second line,” Jenny said.

“I have a nine month old baby girl who is still breastfeeding, so I couldn’t be apart from her. So basically we had to set up camp in my room for three days until I got the PCR result.

Jenny said it was very difficult to get a PCR test. Her GP practice was closed but she finally got an appointment after “refreshing the [HSE] page for six hours straight ”.

” I have been very lucky [to get a PCR test]I would say that this has reduced my isolation period from three to four days. “

While Jenny was “extremely relieved” that she did not have Covid-19, the three days she spent away from two of her children were very difficult.

“My three year old daughter was outside my bedroom door crying because she wanted to see me.”

Jenny said she had seen comments online about apparent false negatives with this particular brand of test, but took it “with a pinch of salt.”

However, when relatives and friends also started having false negatives with the Genrui tests, she thought it was more than a coincidence.

“Some of them had gotten a positive antigen test and then a negative PCR, and the common thread always seemed to be that they were using a Genrui antigen test.”

Jenny reunites with her children after three days

Jenny said she was happy to have isolated herself as a precaution because she did not want to transmit the virus, but was frustrated that she had been unnecessarily separated from her family “for nothing, because of ‘a faulty test’.

Antigens “have their limits”

Genrui spokesperson said The newspaper that the methods for detecting Covid-19 “have their limits” and that the antigen self-test product “can only be used in addition to existing detection methods but cannot be used alone for the diagnosis of SARS-CoV-2 infection ”.

“The test result should be combined with other diagnostic information, such as PCR testing, imaging, and other medical and contact history to determine if the user is infected.”

The spokesperson added that the accuracy of antigen test results “depends on a variety of factors, including standardized sampling, timing of interpretation of results, ambient temperature, testing procedures. exploitation “.

“Users are advised to strictly follow the instructions to reduce the possibility of inaccurate results. “

No news is bad news
Support the journal

Genrui’s antigen self-test kits received authorization for use in Germany, France, Portugal, Czech Republic and Austria on April 10, 2021, and the product has officially received CE self-test certification from European Union on August 2, 2021.

A spokesperson for the Irish Pharmacy Union said The newspaper The IPU “is aware of anecdotal reports that a certain brand of antigen test can, on occasion, give false positive results.”

“However, it is essential that everyone continues to follow public health advice,” they added.

“There are extremely high levels of Covid-19 in all communities in Ireland, so if you test positive for Covid-19 on any antigen test, it is highly likely that you have Covid-19 and so you should isolate yourself and look for a PCR test.

“If you buy antigen tests, people should always make sure they are CE marked, indicating that they meet official standards. “

The newspaper contacted Lidl, Dunnes Stores and the Musgrave Group, which stocks Supervalu and Centra, to see if stores plan to continue selling this brand of antigen testing.

Aoife Clarke, communications manager at Lidl Ireland, said all companies from which Lidl has purchased antigen testing are on the European Approved List and bear the CE symbol.

“The CE mark indicates that a product meets the requirements of the relevant European product directives, which means that it meets all recognized performance and safety standards,” she said.

Dunnes Stores or Musgrave Group had not responded to a request for comment at the time of posting.

Purebaby partners with Cheetah Digital to transform its loyalty program