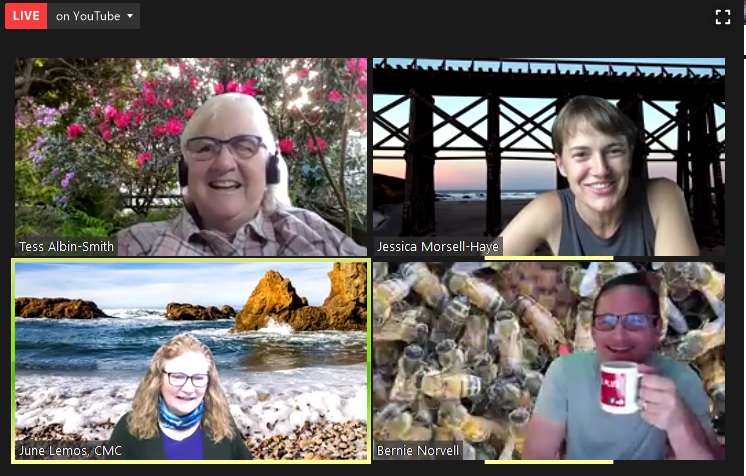 At the start, City Manager Tabatha Miller gave a brief presentation on the census, which is approaching its final days. Locals can call (707) 336-2459 for assistance or with questions.

“This is essential to align our numbers, this is in addition to our public funding, if you haven’t responded please do so,” Miller said.

She also gave “a bit of background” on protection against evictions during COVID-19. The moratorium on evictions from the city ends on September 30, in accordance with the governor’s mandate.

Mayor Will Lee offered thoughts and prayers to victims of the rapid fire in Sonoma and Napa.

Name change meetings have been “loaded”

Councilor Jessica Morsell-Haye spoke about the Citizens Renaming Commission during the Councilors personal report. Morsell-Haye took over as head of the advisory committee that formed after the issue of the town’s name change was raised in July. She said the commissioners “are struggling to line up” but was not specific with examples.

She said she decided to add two more commissioners to the process – Andy Wellspring and Christy Olson Day – “to bring more balance to the dialogue.”

“At (the first) meeting it became very clear that we needed more balance in the philosophical part of it,” she said. “I thought it was important to have a certain representation of the people of our community who are essentially allies of BIPOC. She called Wellspring and Olson Day “diplomatic and open minds”, with “active approaches to the subject.”

Morsell-Haye said she consulted on the decision with Deputy Mayor Bernie Norvell, who was originally tasked with co-leading the committee with her. According to Morsell-Haye, Norvell disagreed with his decision to add more commissioners, but allowed him to take the lead and “fallout,” she said. Norvell said he had stepped down from the commission, saying he felt it was unfair to have such a strong council presence – two advisers – on a citizens’ commission.

Morsell-Haye said the two meetings so far had been “a bit busy” and at the last meeting the city agreed to hire a mediator to lead the meetings.

“It was an intense race. I really believe we needed those two extra voices to find the balance, ”she said. “I understand the concerns, this is a really passionate, passionate subject. People feel that their culture of origin is under threat.

Morsell-Haye told Mayor Lee she was “not confident, but I am hopeful.” The next committee meeting will take place in October.

The first on the regular agenda was the council consent calendar, where questions can be voted on as a single item. Agenda items for Monday’s meeting included approving the minutes from the last meeting; the adoption of a resolution establishing a master wage rate compensation plan for City employees, effective September 28; and the passing of a council resolution approving a loan agreement with Fort Bragg South Street LP, for which Danco Communities acts as a general co-administrative partner, to help the city develop The Plateau, a project of affordable housing located at 441 South Street. The consent agenda was approved unanimously.

Chantell O’Neal, deputy director of the city’s engineering division, then presented a report on behalf of the community development committee, to consider passing a city council resolution revising the city’s fee schedule for various building permit fees and services.

“Staff have encountered issues with the way building permit fees are handled,” O’Neal said, including an unexpected increase in administrative time to process the new fee schedule, adopted last year. “There was a really long time between when we got a permit and when we could come back with comments. “

City staff recommended that all projects that would currently qualify for hourly building permit fees collected through a developer deposit account – those valued at less than $ 75 – be converted to a fixed fee method that reflects the average hourly staff time required to review a building permit, from receipt to inspection, and is based on specific elements associated with the scope of the project.

The main recommended change would be that the city abandon the use of DDAs for fees associated with processing building permits and more properly align the cost of performing the tasks with the amount of fees collected.

Public comment was sparse, but generally asked the council to consider doing a more in-depth study on the matter and come back at a later date for a more noticeable public comment period. Council decided 4-1 to adopt the fee schedule as set out in the resolution, with Councilor Tess Albin-Smith against, and asked city staff to bring back a resolution imposing a moratorium on fees. The city will “spend some public money” on doing a study, Miller said, and will come back with a recommended fee and a decision at a later date.

Miller presented a brief report to council regarding the Mendocino County Homelessness Continuum of Care request for approval of a strategic plan to address homelessness. By turning it over at a later meeting, Councilor Peters had allowed public comment, but there was none. The Council unanimously adopted the resolution.

The CoC’s full strategic plan is available on the county’s website at mendocinocounty.org. The plan was officially adopted by the CoC in April, and board members visited various city councils in the region to present the plan, answer questions and gather approvals.

During Stage 2 conservation methods, the city used 200,000 gallons for three days of use from an emergency back-up tank. There are over 14.5 million gallons left, Smith said, “that’s what he’s here for. He also predicted good prospects for the remainder of the season, although he said the city should prepare for a similar situation later in October.

“Part of this is because it’s a pretty short time between these changes,” Smith said. “There are a lot of other factors involved, tourism and the weather.”

It was moved by Norvell, and seconded by Morsell-Haye, that the resolution be adopted as indicated in the agenda. The water-related emergency has now been brought back to step 1. Water customers are reminded to continue to be mindful of water consumption and maintain the 10% reduction in accordance with the requirements of conservation step 1. Information on current and historical water levels is updated on the City’s website at least once a week at city.fortbragg.com/474/Water-Conservation#liveEditTab_widgets.

There was also talk of an emergency repair of a main sewer line under Main Street. During the recent CalTrans Freeway resurfacing project, the contractor discovered a large sinkhole on Main Street near Alder Street, which is also part of Highway 1.

After an initial assessment of the corroded sewer line that caused the sinkhole, city staff recommended an emergency repair and that the city also authorize the use of its Wastewater Enterprise funds to complete the repair of the sinkhole. faulty sewer line to avoid further damage and risk.

The scope of work should include the removal and replacement of a sewer pipe up to 80 feet wide by 21 inches, followed by a total of 600 feet of “hardened-in-place pipe” for reinforcement. the rest of the sewer line in the right of way. Bypass pumping will be required to route sewage around the excavation. The board approved the use of the funds unanimously.

Norvell and Lee recused themselves from Article 8C, citing personal disputes, which sought to approve and ratify “the execution by the city manager of a memorandum of understanding between the city and Adventist Health – Mendocino Coast, authorizing the application and enrollment of the hospital in section 340B of the program of the Public Health Services Act.

Section 340B of the Public Health Services Act requires manufacturers of pharmaceuticals to enter into an agreement, called a Pharmaceutical Price Agreement (or PPA), with the Secretary of the HHS in exchange for coverage of their drugs by Medicaid and Medicare Part B .

“This supports our community, another important thing to know is that the hospital has the ability to contract with other pharmacies to provide this care,” Miller said. The hospital has agreed to cover emergency services for indigent and uninsured patients up to $ 1 million.

The board, down two with Miller and Lee challenged, had to unanimously accept the approval motion, and without discussion, did so.

The next city council meeting will take place at 6 p.m. on Tuesday, October 13 via a virtual host. For more information, visit city.fortbragg.com.

Editor’s Note: An original version of this article showed an incorrect date for the next city council meeting. City Hall will be closed on Monday, October 12 to observe Indigenous Peoples Day. We regret the error.